on April 05, 2013
The beautiful night just ended. That night a couple of years ago was even more beautiful.


I was in one of the least known valleys of Himachal Pradesh called Tirthan which is an off beat tract far from the meddling clouds. I had a plan to enter the Great Himalayan National Park with a wish to spot the white snow leopard, a rarity in the snow filled valley of the park.The gushing water of Tirthan r...iver which was crystal clear had already filled my body with fresh energy and I felt rejuvinated in the fresh air of a magical Valley. Across the river, there was a beautiful place secluded and tucked in the lap of nature. I shouted on top of my voice and an old aged man responsed by waving his hand. The sound of river didnt allow me to hear his voice. Here was the most suprise element as I saw a cable trolley which was sent by the gentleman and I walked down to get into the cable trolley to cross Tirthan river to reach the House. People call it a house, for me I was finally home. As they say, when the mountains call, you got to answer. I for a moment had the beautiful feeling of being in the lap of mother nature, a feeling which was no where less than the one I would have had in my own mothers lap. Right at that moment I was standing on the other bank of a gushing crystal clear river with no where to go. I decided to spend my day at tht beautiful house.

The proud owner of the place had five pet dogs that soon became my friends and guided me from the trolley point to the House. I don't remember the name of all the dogs but 2 of them were called Bulbul and Bhalu. I was alone and those 5 dogs probably heard all my stories, plans and much more. May be if I try to recall, by end of the trip probably those dogs knew the most about my life than anyone else. The House was located at the banks of Tirthan river, about 15m above the river bed. It was facing the owners 20-acre orchards, mostly of apple, cherries and apricot trees at the lower slopes giving way to the pine and deodar forests at the upper slopes.

I had the real taste of coffee in Himalayas after a long time. The host surprised me with delicacies like Morrell Mushrooms Pulao and Post Dana Chutney along with many varities of rainbow & brown trout freshly caught from the river. I was the only one staying in the 5 bedroom wooden bungalow and after listening to beautiful stories about the place, the legend of the river and knowing the joys of living a simple life in that hamlet, I decided to sleep for sometime. When I got up it was already 8 and the dinner was ready.

I sat in the courtyard, where they had a bonfire going, with a bottle of Contessa Rum and soon got engrossed in the subtle silence and squeaky chill of the night. I kept drinking till well past 1 in the night. The dinner was already kept on the table and as I rarely have issues with cold food, I told the owers to go off to sleep. It was quite late and may be that night I was too drunk to sleep. I picked up the fishing rod kept in the verandah and decided to go fishing. For the rest of the night, I was there trying my best to catch a fish, listening to the sound of water and singing few lines of a himachali song by Mohit Chauhan. I still remember the line Shimle ni vasna, Kasauli ni vasna, chambe jaana zarur. The amount of peace and silence I felt at that moment was unparalled. After sometime I almost felt as if the water of the river was just not making some random noise but was trying hard to get into a conversation with me. All I remember of that night and that moment can be understood through these beautiful lines written by an old poet.
-------------------------------------------------
The beauty of the trees,
the softness of the air,
the fragrance of the grass,
speaks to me.

The summit of the mountain,
the thunder of the sky,
the rhythm of the sea,
speaks to me.

The strength of the fire,
the taste of salmon,
the trail of the sun,
and the life that never goes away,
they speak to me. 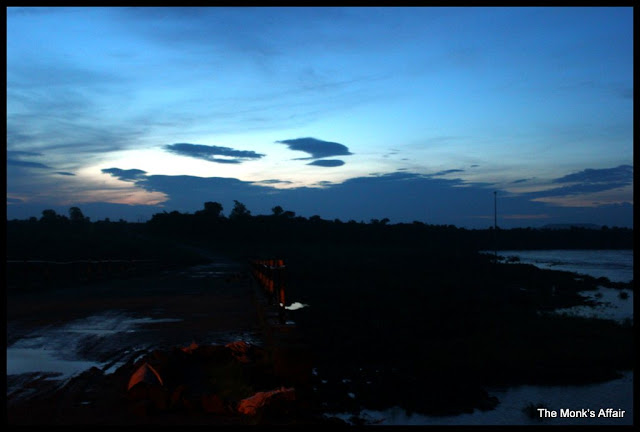