While I try to respond you, let me make it very clear that my reply is, in no way, meant to alleviate the grievances and complaints that you’ve expressed with your heart against me in your outrageously passionate and disheartening letter. Hence, you may choose to ignore this response and continue living in your fake world, where a righteous shift from the darkness of death towards the brightness of life is termed as ‘an act of a cheat’ and where a person, trying to break the shackles of worldly deceptions to emerge a winner, is baptised as ‘utterly selfish’. Melodrama at its best. But alas! I don’t buy it anymore. Not from you at least. Excuse me for that.

Not that I differ from the facts expressed in your letter. You and I did enjoy a wonderful relationship for three years in the past. Two worldly souls, one heavenly connection, and an endless flame of romance. I couldn’t agree more with you on these flamboyant metaphors of fire ‘n’ smoke. You did describe this flame of love appropriately in your argument. But what you forgot to describe was the ‘burns’ that this romantic flame gave me during those years. You correctly illustrated the sanctity and holiness of a selfless relation, but failed to mention the number of times I tried to slaughter my own beautiful life for that one single worthless ‘desire’. This was never a square deal. It could never have been. All it had was a few supposed moments of joy to offer on one hand, and a priceless mind and body at stake on the other. Therefore, my dear friend, I chose to abstain from you. Once, and forever. Excuse me for that.

The decision of leaving you was not an easy one. Neither did I think, it would ever be. With the kind of influence you had over my body and my mind, it was hard to deal and to come out of it as normal. The wonder you very proudly named as ‘strong love’, was nothing but a ‘death trap’, which looked so enticing and alluring from one side, but had an end full of ‘smoke & gasps’ at the other. A magnificent gift of life that God had bestowed me with, could not be ended in the obscure depths of a breathless ocean. A prosperous life that I had always wanted to live, could not be taken to the state of absolute destitution with my own hands. All my ambitions, desires & inspirations were not meant and fostered to be lost in a night full of sorrows and miseries. Hence, I abandoned a worldly possession and decided to call it a day for a supposedly strong relation. Yes! I decided to dump you. Dump you, with no regrets at all. Excuse me for that 'A Burning Cigarette’. 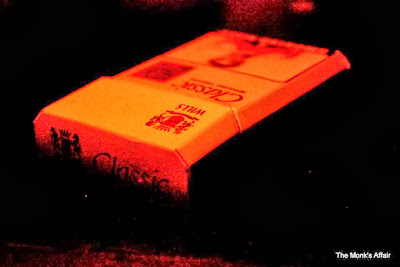