on October 06, 2013
The mist was shrouding the horizon like a dark envelope from the coroner’s office. The birds were chirping and the cacophony was all in the praise of life. My eyes were straining at the distant west and the darkness encroaching from the west. Rains had avoided the region since a year but my reserves were strong and deep.

The last rays had vanished since long and in the fading dusk I could make out the silhouettes of approaching people. It was the quintessential Indian family, quadruple in number, when they finally reached the northern star had also come up . The children were chattering and playful in their innocent ways, their mother was nagging them to nibble, the stale bread which she had bundled in her saree. The kids grudgingly shared the dry bread wanting to have more looking at their father time to time for the incoming admonishment. But the man was lost in his thoughts grim and silent and was looking up as if staring at me. There was a hollowness in his eyes and some unfathomable pain which i could not bear for long. As i was just about to divert my attentions to the scampering rats he whispered something gently ..like a snakes hiss ...FAMINE..and the outright pain in that syllable had the pain of a thousand pin prick .

Soon silence engulfed me which was followed by lightening and thunder, I slept happily as it had rained after many moons dreaming of prosperity and ever going life. It appeared like hallucinating a garish puppet show at first but then realization struck they were gently swaying to the morning breeze, the cloth rope creaking my branches gently. The kids were holding hands fingers clutching fingers siblinghood inseparable even after death. The woman was twisting on her rope as if some invisible force was applying torque to it , her dark hair strands were covering her face and the white of her eyes peeping through the darkness of her cascading hair ,the night rains had washed off the vermillion from the head painting her features with crimson. The man was hanging on my lowest branch with his back to me and then the creak grew louder and he suddenly turned around ,his face a mask of agony and hatred eyes upturned and white looking blankly at me and a faint smirk at the lip end as if grimacing at something beyond me or just may be looking at me. Two of the toe fingers were clawing in the air as if one fidgets when alive.

Ever since there has been a perennial gloom and loneliness around here, they don’t allow their children near me any more... thinking their lovely child will not return back from here or worse will return with someone along with him. Some nights I still hear the creaking as if time has stood still. Some events are so painful and terrible that they deny to stop... they just happen again and again till it enters into the lives of the passerby.... 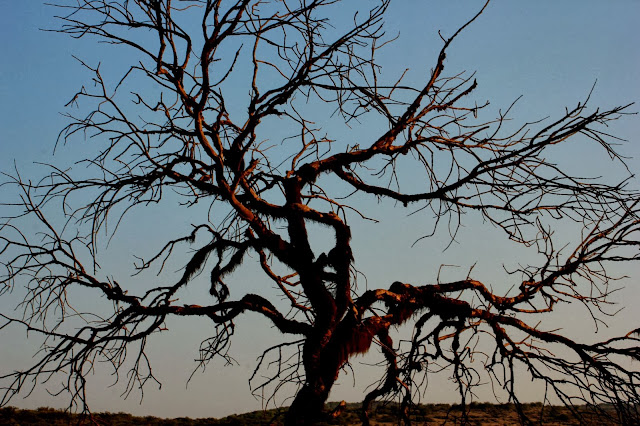