Tomorrow the Sun will rise again

on November 12, 2013
"We both had done the math and Kelly added it all up. She knew she had to let me go. I added it up, knew that I’d, I’d lost her. Cause I was never gonna get off that island. I was gonna die there, totally alone. I mean I was gonna get sick or I was gonna get injured or something. The only choice I had the only thing I could control was when and how and where that was gonna happen. So I made a rope and I went up to summit to hang myself. But I had to test it, you know ? Of course. You know me. And the weight of the log snapped the limb of the tree. So I I I couldn’t even kill myself the way I wanted to. I had power over nothing. And that’s when this feeling came over me like a warm blanket. I knew, somehow, that I had to stay alive. Somehow. I had to keep breathing, even though there was no reason to hope. And all my logic said that I would never see this place again. So that’s what I did. I stayed alive. I kept breathing. And then one day that logic was proven all wrong, because the tide came in, gave me a sail. And now, here I am. I’m back In Memphis, talking to you. I have ice in my glass. And I’ve lost her all over again. I’m so sad I don’t have Kelly. But I’m so grateful that she was with me on that island. And I now know what I have to do. I gotta keep breathing. Because tomorrow the sun will rise. Who knows what the tide could bring ? " - The last scene of Cast Away before Tom hanks goes on to deliver the FedEx parcel.

Time I have spent in last few years hovering, shifting, jumping to places and people has softened my view of the ending. In fact, I now consider the last scene of Castaway as one of the best closings of any Hollywood movie. I don't want to give it away because of people who may have not yet seen it. But the lesson from the scene, which involves a ranch and a road, is that after a few tough hit in life, when dreams are shattered, you must keep on going down the road of life--and you might as well do it with enthusiasm and a smile. The scene is very simple yet visual, the theme song is played for the final time, and the viewer feels hope after vicariously feeling the pain of Hank's character. In retrospect, though I disliked the ending when I first saw it, I am now tempted to place Castaway's concluding scene as one of my favorite movie endings. Why the change in evaluation? Because after last few years of reflection, Castaway mirrors real life, not fantasy, which Hollywood usually portrays. Disappointment happens--but we must move on. God has a way of working all things for our good, even those tough, hurtful, broken things of life.

Life is rarely a ruler-straight journey. It is filled with zig-zags, loops, retreats, and grand pauses. For those of us who believe, these are teachable moments if we only let someone way above us use them. I've missed a bunch of these - others I sat still and payed close attention. In retrospect, I've laughed, cried, questioned, railed, rejoiced, and had deep disappointment. But the lessons were there even if some of them were missed.

Are you/we living on an island and just waiting for what the tide might bring ? Well in my case, I have probably managed to pick my wave from the tide and it keeps me moving. I am already swimming in the deep waters and enjoying the ride to the fullest. 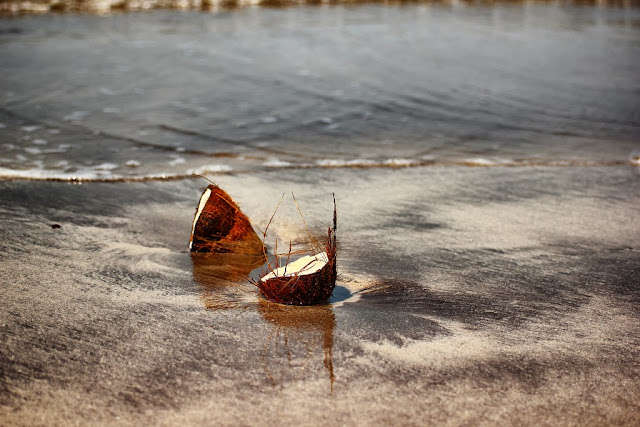